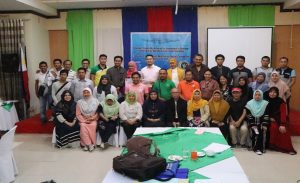 Cotabato City – The three-day activity STRAT PLAN for the development of the structural framework of the Ministry of Science and Technology conducted.  It was held last April 22-24, 2019 at EM Manor Hotel together with other agencies and state universities in the BARMM region. The said activity had set overall goals, priorities, and plan for the ministry.

The first-day event was led by Engr. Aida M. Silongan, minister of MOST-BARMM through its message. The minister has emphasized the goal of the activity which is to come up with the most comprehensive organizational structure, goals, and plan for the ministry. With the powerhouse, considering the presence of academe and other agencies, she enjoined the participation of everyone requesting to leave behind personal issues and political affiliations. Also, Ms. Hayria Candao, a representative from the United Nation Development Program has also conveyed her message of support for the ministry.

During the preliminaries, the general guidelines for the activity were initiated. The structure should be reflective of the mandates of the ministry based on the provisions of the Bangsamoro Organic Law. The functions and responsibilities should be attuned to the mandates. The functions and its objectives should address the needs of the region as far as its mandates are concerned.

Additionally, the organizational structure and programs and services of the ministry were finalized and reviewed well since the said documents will be approved by the Technical Working Group of the Bangsamoro Transition Authority.

The strengthening of the organizational structure through strategic planning is deemed crucial with the change of leadership in the BARMM region.