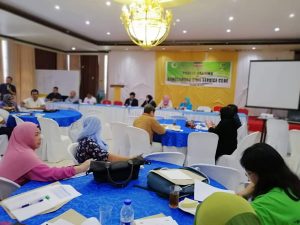 Yesterday, October 15, 2019 the Civil Service Code public hearing was conducted for Maguindanao and Cotabato City, it was the 5th of the six series. The affair has generated  substantial insights to be considered in the drafting of the BARMM Civil Service Code. Spearheaded by the energetic MP Engr. Aida M. Silongan along with her team of lawyers : Atty. Sukarno Abas, Atty. Maymona  Ampuan and Atty. Al-Rasheed Lucman Balt.
MP Silongan, who has been relentlessly heading the BARMM wide hearing has never failed to explain the rationale of conducting the public hearing for the drafting of the Civil Service Code for the Bangsamoro as mandated by the Bangsamoro Organic Law. She always emphasised  the accommodations of the marginalised sector in the public offices including the Arabic professionals that have  graduated in  foreign countries.
On the other hand, Atty Sukarno Abas fiercely gave lights to most queries raised during the affair.
The Municipality of Guindulungan, Maguindanao has formally submitted a  “Sanggunian Bayan  Resolution  No. 2019-044 requesting to include in the Bangsamoro Civil Service Code, the provision that will grant appropriate civil service eligibility to temporary, provisional and casual employees of BARMM  component LGU  who have rendered an aggregate of 10 years of government service as of the approval of  such code “.
It was attended by different line agencies of government, Members of Parliament as well as some representatives, LGUs and MILF constituents.